‘Reliefs’ arrive, bring consolation. Nothing changes. Water recedes. Drowned for months, the land emerges, drained of life. Hordes of living skeletons teeter on this dead land to build a life again.
Floods continue to wreak havoc in eastern parts of the country.

Many people suffering in Assam and Bihar flood

Every year we hear about floods first in Assam and then in Bihar. Every year, we read about animals drowning in the Kaziranga National Park and assume that some people must have died too.

We look up only when the death toll crosses 100, as it has this year.

Floods have been bad in Assam and threaten to be equally bad in Bihar flood.

This year, floods have been bad in Assam and threaten to be equally bad in Bihar. We notice deaths in Bihar when they cross 500, such as in 2017.

Thousands of square kilometers of one of the most fertile lands in the country flooded across as many as 19 districts of north Bihar that year is, at best, a faint national memory.

Amid rising Covid-19 cases, the flood situation in Assam remained grim. Many people have died in Nagaon and Morigaon districts.
However raising the death toll in the monsoon deluge to 87, While around 24.20 lakh people in 24 of the 33 districts continue to be marooned.
Besides Assam, at least five people were killed in floods in Meghalaya’s West Garo Hills district where the deluge has affected about one lakh people during the past few days.

Even animals are affected due to flood water.

Forest department and Assam State Disaster Management Authority (ASDMA) officials said that at least 116 animals have been killed in floods and 143 animals rescued. Around 14 lakh domesticated animals and over 8 lakh poultry birds were affected due to floodwaters.
90 % percent of the world-famous Kaziranga National Park. 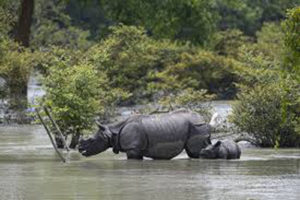 It is also informed that as 90 percent of the world-famous Kaziranga National Park, home to more than 2,200 one-horned Indian rhinoceros, remained flooded.

Besides Kaziranga National Park, located on the edge of the eastern Himalayan biodiversity hotspots of Golaghat and Nagaon districts, the Manas and R.G. Orang national parks, the Pabitora and Tinsukia wildlife sanctuaries were also affected.

The Brahmaputra river is flowing above the danger mark. 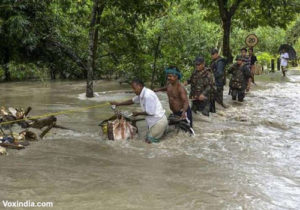 The ASDMA officials said that as many as eight rivers — Siang, Dhansiri, Jia Bharali, Kopili, Beki, Gaurang, Kushiyara, Sankish — besides the mighty Brahmaputra are flowing above the danger mark in a large number of places in 12 districts.

15 districts are at the worst-hit.

The officials said that over 2,323 villages and 110,323 hectares of crop area in 24 district have been flooded . Hundred of houses were fully or partially damaged due to the floods.

Besides this the officials said that, erosion of river banks at a large number of places, roads, embankments, bridges, culverts and other infrastructure were damaged at many locations in the 24 districts.

People were rescued by NDRF, the SDRF, district administrations, and locals. 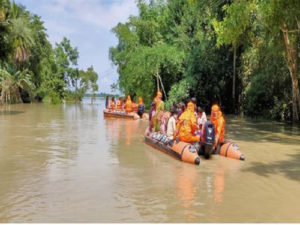 Chief Minister Sarbananda Sonowal also visited a relief camp in Teok Rajabari Higher Secondary School, Jorhat district, and spoke to the affected people.
He also tweeted by saying that “Our government is working on a war footing to provide all necessary assistance to the flood-affected people.”

The government has not sent anything to help us out said by the locals.

Despite this being the case, Assam’s disaster preparedness remains nonexistent. While the state government has largely focused on short-term measures like damage assessment and relief, the floods repeatedly push the state to the brink of social and economic ruin in the absence of a holistic flood control mechanism.
Where as people are being provided shelters and rescued from the places there are also a part of some people who are not getting any kind of help by the government. The locals of those people says that , “The government has not sent anything to help us out so we are trying to take shelter in nearby dams. Now all that is left to do is pray to Kamala Maiya to soak up the water .”

Torrential rain in the catchment areas of Bihar and Nepal occur flood.

Torrential rain in the catchment areas of Bihar and Nepal has aggravated the flood situation in the state with almost all major rivers flowing above the danger mark.

As many as 36 people have lost their lives in flood-related incidents in the last 24 hours.

Rivers are flowing above the danger mark.

According to a report by the water resources department, the water level of the Kosi, near Veerpur barrage, was at a dangerous level at 8 a.m.
Similarly, the water level in the Gandak river has crossed the danger mark near Balmikinagar barrage. 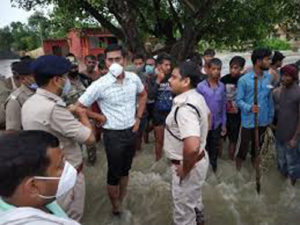 Water level of Gandak, Kosi and Bagmati is rising all along their course and are flowing above danger marks.

Adhwara group of rivers are also flowing above danger mark. People have left their homes and taken refuge in higher areas.

The disaster management department is constantly maintaining a vigil.

IMD has forecast heavy rain in the state in the next 48 hours.

The floods had affected 25 lakh people in the state.

Over 12 districts are reeling under the impact of the flood.

Floods have affected 30 lakh people in 12 districts. Over 11 lakh people of Darbhanga are reeling under the impact of flood. 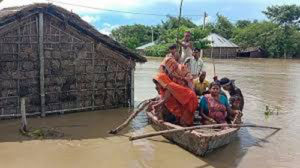 The other worst affected districts are Gopalganj, Saran, Samastipur, East and West Champaran.

Roads and railways tracks are damaged by the floods.

As many as 110 roads have been affected by the floods. Traffic on 28 of these roads has been completely disrupted. Five road bridges, culverts or their contact paths have been damaged. A road construction official said 65 roads have been submerged.

Long route trains have been diverted on alternative routes.

38 lakh people in 765 panchayats in 93 blocks across 11 districts of Bihar are affected.

Chief Minister Nitish Kumar has instructed engineers to remain stationed for 24 hours at embankments so that emergency repairs can be carried out.

As many as 765 panchayats in 93 blocks across 11 districts of Bihar have been affected by the surging waters.

NDRF and SDRF teams are carrying out relief and rescue operations.

The NDRF and SDRF teams are carrying out relief and rescue operations round the clock. 26 teams of NDRF and SDRF have been pressed into service. Over two lakh sixty thousand people have been evacuated so far. 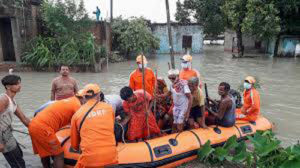 Despite relief and rescue operations by the Bihar government, people are in dire straits. About 25 thousand people are taking shelter in 26 relief camps.

How to verify misinformation and fake news?