What is the need and why will India speak on Dalit lives matter in the contemporary world?  India has had many years of caste based, religion based and gender based discrimination but are they really violent towards scheduled caste like the Dalit community?

In May 2020 of 46 year old African American man named George Floyd died in Minneapolis United States of America as he was being assaulted by the police. It was a clear picture of a racial assortment. Funny enough as if the same happens in India rarely people speak about it, but for the #blacklivesmatter, many well known celebrities to young individuals came out on social media stating their opinion on how they condemn the act.

In fact in India, when police man to form violent encounters or involve themselves in police brutality there are many people who find them as heroes.

So if we call these brutal and barbaric scenes made by our police who is supposed to keep us safe as right decisions, then then the question should be on ourselves as well. Because we can question very easily as to when will India speak on how much Dalit lives matter but we love to watch our favorite heroes as a rowdy police man in a Bollywood movie. We enjoy the heavy action and bleeding we see on the screen.

Not only this we also good for it or write reviews on a social media accounts and indirectly promote the attitude of violent policemen.Take the example of ‘Ab Tak Chhappan’, a film that talks about a policeman who is proud of himself for encountering 56 killings. The movie was supported so much that it also had a sequel made afterwards.

The Dalit community despite of receiving reservation benefits still struggles a lot to be socially accepted and to come up the ladder of social and culture status.

Like George Floyd India has also experienced caste based, class based racial based, and gender based violence. Which gives us a thought to ponder upon the fact about the lives of our own country and its country men.

Hate speeches, Cyber Bullying and physical violence has been seen a lot against the Muslim and Dalit Communities in India. Hence, when we see viral images and videos of bleeding innocent lives of India, we find that #Dalitlivesmatter is a relevant hashtag to talk more about.

Dr BR Ambedkar worked day and night so that all those oppressed communities can get social representation. He was a passionate man who dedicated his life fighting for his and his community’s rights. 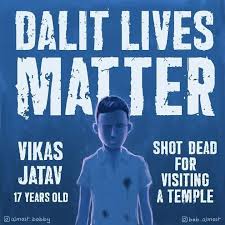 Just after the George Floyd case in America, news of Vikas Jatav’s murder came into picture. A 17 year old Dalit boy who was dragged out of his house at an odd hour of the night and was shot dead by four young men belonging from an upper caste family. The story of this young boy who was murdered for only visiting a temple with a known one did came out but could not gain much popularity for as people spoke for George Floyd but we could not see India speak for Dalit lives matter.

In a village in Karnataka in the year of 2017, a man decided and executed his plan of poisoning a well that was meant for Dalits to create water shortage for them.

March 14, 2016 saw another brutal attack when a Dalit Man named Shankar and his upper caste wife Kausalya were walking down the lane when suddenly they were attacked by killers hired by Kaushalya’s family.

Damage of Property made with respect to the Dalit community 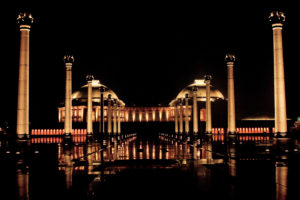 Recently in Lucknow, in the Dr Bhim Rao Ambedkar memorial Park at Gomti Nagar, it is suspected that some men came in and removed brass made plates with history written on it. These plates contained history of the people who fought for the social upliftment of the socially oppressed communicaties.

Dr Bhim Rao Ambedkar, the law minister of Indian government for 1947-51 who fought strongly against the caste discrimination practices made by upper caste fellows. Bharat Ratan awardee Dr. Bhim Rao Ambedkar was a man of discipline and had also made women empowering contributions in India. He was one of the first and foremost to have India speak on Dalit lives matter.

The park holds memory of social reformers like Jyotiba Phule, Sree Narayana Guru, Birsa Munda, Shahuji Maharaj, Bhimrao Ambedkar, Kanshi Ram and others who were determined to work for humanity, equality and social justice at all times. This park has been a wonderful park for many from the scheduled castes as it reminds people the hard work that these brave people have done to fight the culturally discriminating caste system.

Youth has the power to rebelliously speak against the wrong. They are the new trendsetters and they can create a huge historic impact if necessary. But the problem with India’s highly potential youth is that they seem to be lethargic and are ignorant towards sensitive issues like this. The youth can come together in solidarity and easily have India speak against the violence that the Dalit community face daily even by creating effortless social media rage with hashtag of #dalitlivesmatter.

It is heartbreaking to know that we can voice our opinion for another country but not for our own. Consequently, I would like to repeat my question, when will India speak on Dalit Lives Matter?
Tags: black lives matter, dalit, dalit community, dalit lives matter, Dr B R Ambedkar, Dr bhimrao, george floyd, History, Karnatka, Lucknow, obc, sc, st, UP, Uttar Pradesh