Madhya Pradesh Governor Lal Ji Tandon, who was admitted to a hospital in Uttar Pradesh’s Lucknow since last month, died this morning.

Lal Ji Tandon was the governor of Bihar between August 2018 and July 2019 when he took over as Madhya Pradesh’s Governor.

In 2009, the senior BJP leader and a protege of former prime minister Atal Bihari Vajpayee, succeeded him as the Lucknow MP.

Lal Ji Tandon was 85 years old. He was admitted to Medanta Hospital in Lucknow on June 11 due to breathing problems and other health issues.

Lalji tandon was born on 12 April 1935 in Lucknow , Uttar Pradesh. He is 85 years old . He is an Indian politician serving as the 22 nd and current Governor of Madhya Pradesh. He is a member of the Bharitya Janta Party

Lal ji tandon was  graduated from Kalicharan Degree College . He married Krishna tandon on 26 February 1958. He has three sons. His son Gopal ji tandon is currently a minister in the Yogi government of Uttar Pradesh.

From 1996-2009, he was a member of Uttar Pradesh Legislative Assembly for three terms. 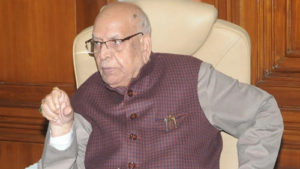 From 1977-1999, he served as the Minister of State, Urban Development and Water Supply, Govt. of Uttar Pradesh.

From 1997-2002, he served as the Leader of House, Uttar Pradesh State Legislative Council.

From 1999-2000 he served as the Minister of State, Urban Development and Urban Poverty Alleviation, Govt. of Uttar Pradesh.

From 2000-2002, he again served as the 2 Minister of State, Urban Development and Urban Poverty Alleviation, Govt. of Uttar Pradesh.

From 2002-2003, he served as the Minister of State, Housing, Finance, Urban Development and Tourism, Govt. of Uttar Pradesh.

From 2003-2007, he served as the 7 Leader of Opposition, Uttar Pradesh Legislative Assembly.

Later in his political life

In April 2004, he On the occasion of his birthday and Even also on the eve of elections, he was going to distribute sarees to the poor women of his region and at the moment stampede went happened, and many people round about 21 killed in this stampede.

The case has been filled in his name, but afterwards he got the clean chit

He was elected to 15th Lok Sabha in the year 2009 from Lucknow Lok Sabha Constituency. He defeated Rita Bahuguna Joshi of Congress Party by over 40,000 votes. This seat was earlier held by former Prime Minister of India, Atal Bihari Vajpayee. 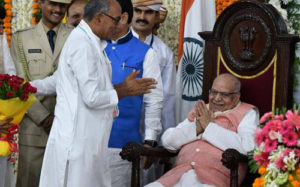 On July 20, 2019, he was appointed as the 22nd Governor of Madhya Pradesh replacing Anandiben Patel.

Today morning his son Ashutosh Tandon Twweted , informing that his father Lalji tendon is no more with us . He wrote in his tweet that . “With extreme sadness we inform that that my father Lalji Tandon passed away at 5.35 a.m. on Tuesday,”

He appealed to people to pay their respects from their home so that social distancing norms were followed during the COVID-19 pandemic.

In a medical bulletin, the Medanta Hospital this morning  also said: “Shri Lal Ji Tandon was admitted at Medanta on June 11. During investigations, he was diagnosed to have chronic liver disease, because of his multiple ailments, he was put on life support system. Team of medical experts made all efforts for his survival, despite all efforts he took his last breath today at 5:35 AM.

Condoling his death, Prime Minister Narendra Modi said on Twitter Mr. Lalji Tandon would be remembered for his “untiring efforts” to serve society. “He played a key role in strengthening the BJP in Uttar Pradesh. He made a mark as an effective administrator, always giving importance of pubic welfare. Anguished by his passing away,” said Mr. Modi.

Uttar Pradesh Chief Minister Yogi Adityanath also condoled Lal Ji Tandon’s death on Twitter. “Saddened to hear about the death of Madhya Pradesh Governor. In his death, the nation has lost an able administrator, popular leader and a social worker, He was the soul of Lucknow. May his soul rest in peace,” he wrote in Hindi.

Former UP chief minister Mayawati tweeted: “Madhya Pradesh Governor and a former senior minister in previous UP governments, Lal Ji Tandon was a very amicable and cultured person. The news of his death during treatment in Lucknow is extremely saddening. I pay my condolences to his family